Every human deserves to survive and thrive.  Every child deserves a future.  Yet millions of people are left behind – because of who they are or where they live.  It is through his program that we introduce our ideas for a radically reformed educational system and society at large.  We require a world in which every child gets an equal chance to succeed in life.  That’s why Hustle For Humanity invests in equal opportunity for every child – every day, in times of crisis and for our future.  In the U.S. and around the world, we endeavor to give girls and boys a healthy start, the opportunity to learn, and protection from harm.  When conscious people who embrace the message and the cause make an effort in their communities to internalize and disseminate the mission, people’s lives are saved and their futures are brighter.

The Five Meritocratic Principles Necessary For Equal Opportunity For Every Child:

3) Sex, race, religion, age, background are irrelevant. Talent is everything.

4) You start from the same point as everyone else, and you go as far as your talents take you.

5) The highest rewards for the highest achievers. 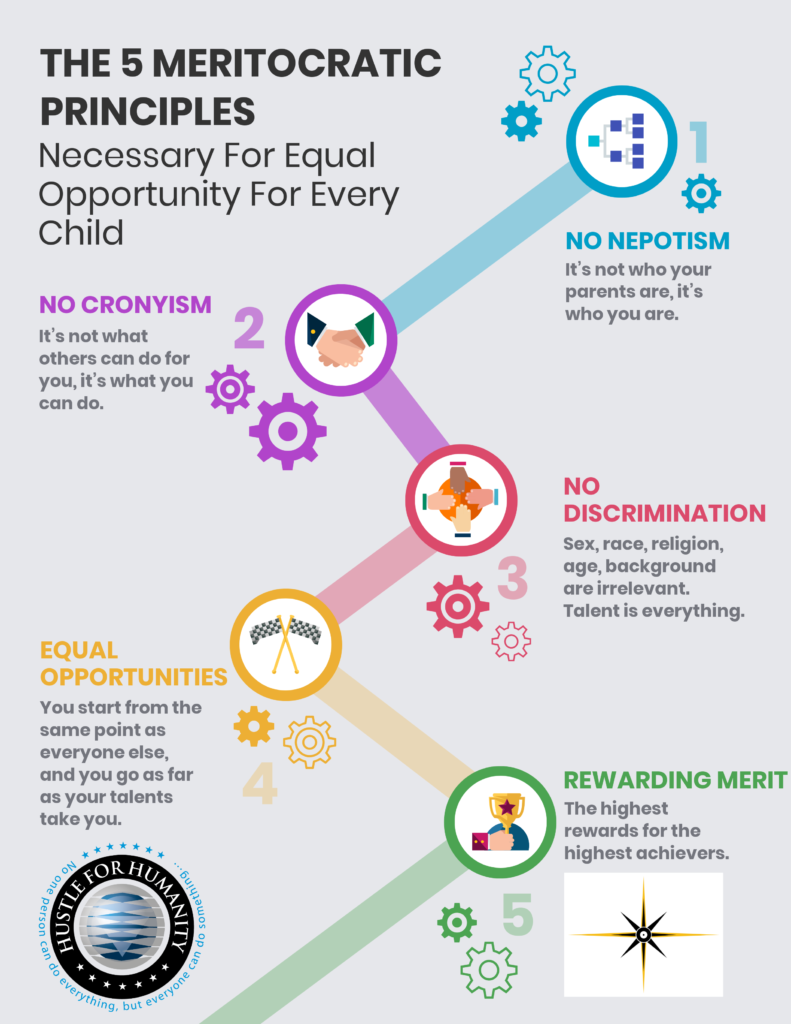 The Meritocratic Values Necessary For Equal Opportunity For Every Child:

1) We require a world in which every child gets an equal chance to succeed in life. There should be no elite private schools for the children of the rich (and lower quality public schools for everyone else).

2) The abolition of party politics. All members of Parliament/ Congress should be independents, elected for their specific expertise and merit.

3) Only those with a relevant education or work experience should be allowed to vote, rather than anyone who has merely reached voting age. There should be citizen exams through which everyone can obtain the right to vote on a certain issue. For example, those who wish to vote for the next Minister of Finance should have a diploma which shows they have enough understanding of this field to give an educated vote.

4) The introduction of 100% Inheritance Tax, so that the super rich elite can no longer pass on their wealth to a select few (their privileged children) rather than to the Commonwealth. This would automatically bring to an end the reign of elite dynasties and hereditary monarchies.

5) A radically reformed educational system, based on the Myers-Briggs personality types. Education is the key to equal opportunity for every child and a progressive society. Everyone must be guaranteed the 10,000 hours of training and practice required to turn people into experts in their chosen fields.

6) To replace free-market hyper-capitalism with social capitalism, and to replace Democracy with a fully transparent Meritocratic Republic, under a Meritocratic Constitution.

“The hideous thing about meritocracy is it tells you that if you’ve given life your all and haven’t got to the top you’re thick or stupid. Previously, at least, you could always just blame the class system.” – Laurie Taylor

No one from the unprivileged class has a chance in a two-tier system of privilege. Once the class system is removed and everyone is given an equal chance then, if you give it your all and have done your best, it’s impossible that you won’t do reasonably well in life. There is, however, no guarantee you will be a winner. By definition, few people can be at the top. EOFEC promises everyone an equal chance. It doesn’t promise them victory.

Some critics have raised the issue of the principle of incompetence (the “Peter Principle”). In a meritocracy, they say, people’s careers will stall as soon as they reach the first level at what they are unable to do the job. It’s rather baffling why such a criticism should be leveled. Is it being suggested that it’s a good thing that people are promoted beyond their level of competence? Privileged people are forever being promoted beyond their capabilities. This must be stopped.

The task is to promote the concept of primus inter pares – first amongst equals. Everyone sitting at the round table has a set of talents, some of which are more suited to some tasks than others. The person most talented for whatever task is the current focus becomes the temporary first amongst equals, and everyone else gets their chance when their area of expertise becomes the focus. There is no old world pyramid, and none of the pyramidal rewards of the old world. The central task of the old world is to enshrine the pyramid model, with themselves at the top (naturally), enjoying enormous and disproportionate rewards.

EOFEC attacks all aspects of capital. By the tool of 100% inheritance tax, it brings dynastic family wealth and privilege to a permanent end; by promoting “what you know” (merit) over “who you know” (privilege), it destroys social capital; by redefining culture and aligning it with merit rather than privilege, it destroys the prevailing cultural capital, and it thereby redefines the signs and symbols associated with symbolic capital.

The new meritocratic system of capitalism (embracing all four forms of capital) is called social or public capitalism in which there is no longer any privileged elite pulling the strings. The hyper-capitalist pyramid is toppled and replaced by a meritocratic round table where anyone sitting at the table has the same opportunities as everyone else.